A simple request allowed a father more than 1,000 miles away to see his son up close on graduation day.

More than an hour and a half into a Facebook Live broadcast of the South Hills High School graduation ceremony, a comment appeared that read: “If there is any chance to view Juan Escobedo … his dad is watching from Guadalajara, Mexico. God bless you for making this possible for all the people who can’t be here.”

With a few details on where the graduating senior was seated, Social Media Coordinator Kiana King, who was filming the live broadcast, made her way to Juan.

“[Where] is Juan Escobedo,” she asks a row of students. “Your dad says hi from Mexico.”

Stunned, Juan smiles and waves hello to the camera and to his father watching on the other end. 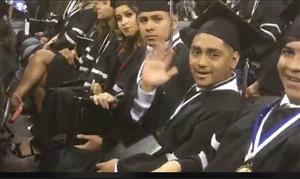 It was just one of many special, feel-good moments captured at graduation ceremonies throughout Fort Worth ISD recently.

An estimated 4,600 students are receiving diplomas from Fort Worth ISD’s more than a 20 high schools and alternative schools.  The District’s graduating Class of 2018 has amassed $92.5 million in scholarship and grant offers.

FWISD hosted a majority of its 2018 graduation ceremonies, Friday, June 1 through Sunday, June 3. The Class of 2018 was a significant one two District schools – Benbrook Middle-High School and Young Men’s Leadership Academy, who conferred diplomas to their very first graduates.

Graduation season will come to a close with the Jo Kelly School commencement exercise, slated for 1 p.m. Wednesday, June 13 in the school gymnasium.

Miss King, who filmed the five broadcasts, said it was eye-opening capturing milestones that some students’ loved ones were not physically able to witness.

“It was really beautiful that we were able to provide that important moment to parents no matter the distance or time,” Miss King said. “It was just really powerful for me at least.

“It really put everything in perspective for me about the work we’re doing.”

Also captured in broadcasts were moments of inspiration.

Kirk P. Preston II in his valedictory speech from the YMLA graduation quoted business titan Elon Musk: “When something is important enough, you do it even if the odds are not in your favor.”

The odds were stacked against the inaugural 41-member graduating class at YMLA, Kirk said. Yet, they finished with a 100 percent passing rate and 100 percent of seniors receiving college acceptance letters. The seniors also traveled the world, visited various states, were a part of YMLA becoming a winner of the 2018 America’s Best Urban School Award and this year’s graduating class surpassing $8 million in scholarship offers, Kirk said.

“The odds were not in our favor … but we did [it],” he said. “Let’s continue in this spirit, taking the odds that were against [us] and continue to beat them. Pay no mind to the naysayers.”

WHAT CAN WE HELP YOU FIND?